Pittsburgh Asphalt Driveway and Paving Company was founded in 1945 by Joseph Laudato and William Felix. The company’s original location was in Hays, Pennsylvania. Joe bought the company from Bill in 1951, and the Laudato family has owned and operated the company ever since.

In the early 60’s, Joe built a new office building and moved the company to Streets Run Road in West Mifflin. 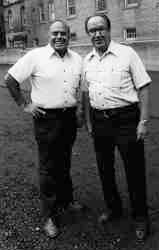 Joe’s brother Nick took over the reins of the company in 1966 and purchased it the next year. He built a new garage near the office on Streets Run Road to enable year round maintenance of his growing fleet of equipment. The company began using the acronym PADAPCO in its logos and advertisements.

In 1986, after years of continued growth, Nick moved the company to larger quarters on Glass Run Road in Baldwin Borough. The new facilities offered substantially expanded office and garage space.

In 1994, Nick entered semi-retirement and passed the baton to his son Domenic and daughter Mary Ann. The company also took its current name, Pittsburgh Asphalt Company. The company has continued to grow under Domenic’s stewardship. In May 2002, Domenic moved Pittsburgh Asphalt into its new facility in Baldwin Business Park located at 4993 Old Clairton Road in Baldwin Borough.